Digital Signage In Manchester – About Us & Our Local Projects 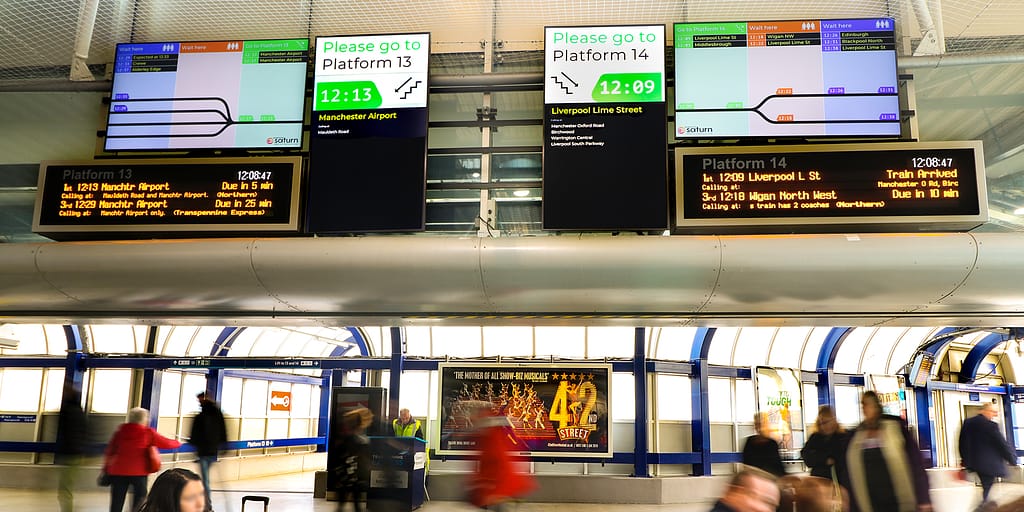 We offer the most comprehensive suite of digital signage services in and around the city. What that means is, whatever stage your project is at, no matter how complex it is, or how big or small your budget is, we can help.

Our digital signage services include:

Some of our digital signage solutions

If you’re interested a specific type of digital signage solution, we offer a full range. Examples of the types of solutions we offer include:

Our history in Manchester

Saturn Visual Solutions has been based in Greater Manchester ever since the company opened its first office in Wigan back in 1998. We’ve been delivering digital signage projects in and around Manchester ever since, working with big brand names like ODEON, Volkswagen, Northern Rail and the NHS, as well as smaller organisations.

That’s not to say we don’t work outside the area. In addition to working extensively around the North West of England in places like Warrington, Liverpool, Lancashire, Cheshire and Cumbria, we’ve installed tens of thousands of items of digital signage hardware at locations right across the United Kingdon and Ireland. We also manage and maintain displays the length and breadth of the British Isles.

In July 2014, we decided to expand and move premises to MediaCity Uk, less than 3 miles from Manchester city centre, which is our current headquarters.

Some of our digital signage projects in Manchester

When buying digital signage, it can be hard to get a feel for exactly what you’re spending your money on. So, it helps to go and see some examples in action.

If you live in or around the North West of England, you’ve probably already seen examples of our work at places like cinemas, train stations, car showrooms, hospitals or office buildings.

If you’d like to check out some work we’ve done in the Greater Manchester area, here are just a handful of places we’ve worked at that are open to the general public to go and visit.

Reel wanted to evolve its branding and create a unique look and feel for its cinemas.

We helped Reel set new brand standards that would be cost-effective to reproduce for other cinemas and would set all of their multiplexes apart. These standards were applied to the creation of the new Reel cinema at the Riverside Centre in Rochdale town centre.

Using the new designs we’d developed for Reel, we built four bespoke self-service ticket kiosks for the foyer area. We installed six menu boards behind the bar/food counter in the foyer, two screens behind the ice cream counter , and another screen within the Sweet Barrels pick & mix area.

For showing film trailers, we installed a super-thin screen in the corridor. We specified this particular model to avoid any screen damage when cinemagoers were likely to nudge it at busy times. We create all the content appearing on the screens, except the movie trailers.

Johnson Cars created a brand new Skoda dealership at Challenge Way, an area with multiple competing car dealerships. The Saturn team worked with the General Manager to identify the site’s digital signage needs, then applied existing Skoda’s brand standards to them to create a consistent look and feel with other Skoda dealerships.

We installed an 85 inch LED screen to act as an eye-catching showpiece, and a 55 inch interactive screen for use as a car configurator. We then set up all the relevant software to control the showpiece screen and configurator.

Old Trafford football ground was looking for cost-effective digital signage screens that would last, for one of its food & beverage counters in the stadium.

We specified and installed four screens above the counters. Despite this work having been completed ten years ago, the screens are still in place and have proved to be very robust despite the variable seasonable temperatures in the stadium.

As part of the fit-out, we installed two double-sided and six single-sided totems which also act as sign-posts. These had to be carefully installed to avoid damaging the fabric of the building.

Eight menu boards were positioned above the food and beverage counters, which show concessions information and promotions. We then set up screens in the foyer with a live-data integration (from a third party system) showing the film times and box office availability.

The content shown on all of the screens in the cinema is created by Saturn’s in-house team, with the exception of the film trailers.

Whilst our demo room isn’t exactly open to the public, we love inviting existing and potential clients to see it. We believe that there’s nothing quite like seeing digital signage in action to really appreciate the potential of what it can do, and the benefits it can deliver.

Within the demonstration suite at our offices in MediaCity UK, we have an LED wall, menu boards, display poster cases, a social media wall, and a Poly video conferencing suite.

Before we take anyone on a tour we’ll ask about your site/s and what your needs and goals are. We’ll then show you some hardware and content relevant way to what you need.

If you’d like to have a tour of our demo area, simply fill in our contact form and we’ll be in touch to book a date and time for your visit.

If you’d like to learn a little more about Saturn, why not take a look at our about us page?

Send us a message

We hope you found this interesting. If it's sparked your interest in a particular subject or raised any questions, why not get in touch and speak to us about it?

How To Get A Good ROI From Digital Signage