ODEON was creating a new Art-Deco themed Luxe cinema with 238 seats across two auditoriums underneath a luxury hotel in a busy area of London’s West End.

To maximise the visibility and prominence of the cinema within Leicester Square, ODEON wanted to erect a large convex LED wall on the building’s exterior. It also wanted the standard hardware, used for all of its Luxe cinemas, installed within the building.

The site had very limited clearance around it with no road access, only public pathways. During the fit-out the only way to access the new cinema’s interior was via narrow, fire escape stairs.

Subsequently we had to design a bespoke framework for the LED wall which would work around the fins, and comfortably take the weight of all the hardware. The design used sleeve brackets to fit over the fins and would allow the framework to be mounted on top of them.

The framework design was sent to structural engineers for evaluation on its ability to support the necessary weight and for wind shear factor, and was quickly approved. The design was then submitted to the building’s landlord for approval and accepted without change. 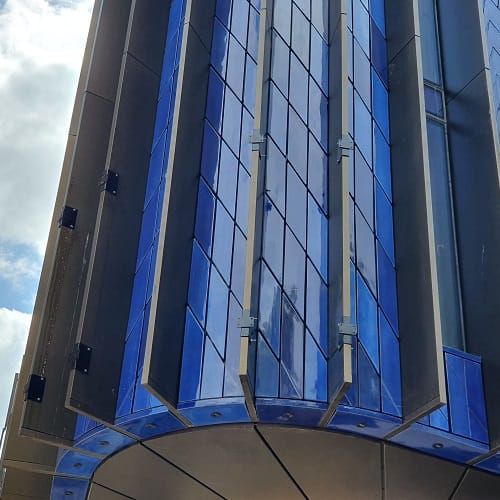 The limited clearance around foot of building (4 metres), meant that hoardings had been erected as close to the building as possible. This gave our team just 2.5 metres clearance within the hoardings to bring onto site all the relevant heavy lifting equipment and hardware, and build scaffolding to allow the LED wall and framework to be installed on the building’s façade.

Inside the building there was a steep escalator, which required a large video wall with nine 55” screens to be installed above it. To be able to reach the location for the display, we used scaffolding (which also had to be carried onto the site via the fire escape stairs) to create a 10 metre-high platform so it could be erected.

We also transported onto site and installed:

A total of 45 screens plus the relevant mounts, enclosures, media players and cabling were carried into the building via the narrow fire escape stairway.

Despite a covid 19 outbreak which resulted in the site being cleared for a fortnight, the six- week project was completed on time and within budget.

“Despite the complexity of the brief we gave Saturn and all of the logistical issues related to lack of space, noise constrictions, transporting goods onto site, and a covid-19 outbreak, they delivered everything on time and within budget as if it was the simplest project in the world.”

“It’s important for us to have project partners that appreciate what’s needed and why, to work around any problems that arise, and just get things done, and we can rely on Saturn to do that."