We’re a digital signage agency that specialises in commercial LED walls. We can supply and install flat and curved (concave and convex) formats, both in indoor and outdoor locations.

We are supplier agnostic to ensure you get the best possible deal, and can source our LED wall hardware from manufacturers including Absen, Sharp NEC, Samsung, LG, and Unilumen.

Should you want a complex, non-standard layout, or want to erect your LED wall in a challenging location (e.g. on a wall with a tight radius, on a non-flat surface), we’re confident we can help you.

Speak to our team 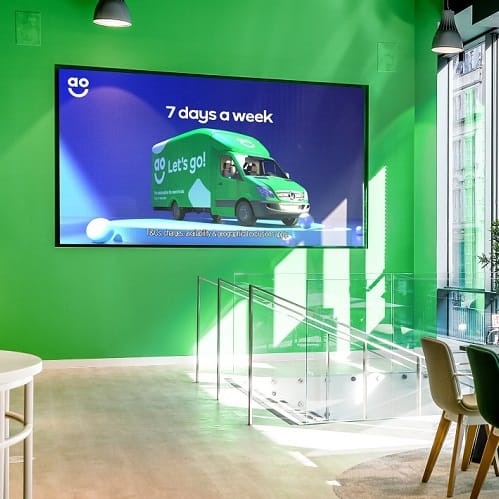 What is an LED wall?

LED walls are the next generation of digital signage. They provide a vibrant, continuous display that appears sharp to people in relatively close proximity or at long-distance. They can be flat or curved and can be used indoors or outdoors.

They are composed of lots of small tiles containing LEDs which are held together using a framework, making them easy to maintain. Should an LED panel become faulty, it can simply be lifted out of the display and replaced with another, with no colour calibration needed.

Unlike a screen, an LED wall doesn’t have set dimensions. This enables you to create a display in the size and shape you want, rather than having to be limited by standard screen sizes.

They are more efficient than a traditional video wall (made up of LCD or LED screens), using significantly less energy and with roughly double the overall lifespan.

Speak to our sales team

Types of LED wall & associated hardware we can supply & install

Why use Saturn for your LED wall?

Experience – We specialise in LED walls and have created them in all sorts of different formats (curved and flat) and locations (indoor and outdoor). We’ve designed, built and installed numerous bespoke frameworks for LED panels to create unique displays that perfectly meet our clients’ needs.

Prices – We’ll speak to various suppliers (e.g. Samsung, NEC, Absen, LG, Unilumen) and use our purchasing power to get the best hardware prices for you.

Convenience – We’ll take responsibility for making sure everything is done for you as conveniently and cost-effectively as possible. We’ll identify the size and specification of panels you need and specify an appropriate framework suitable for the layout/position you want it to appear in. We can then supply and install it for you, provide software to control your on-screen content, and provide ongoing technical support.

Content – We have a team of digital signage content specialists who can design and create content suitable for large format displays – taking into consideration all the technical requirements of your display and its layout/position. We can also manage your content for you.

Get advice and a no-obligation quote

We know how useful ‘ballpark prices’ can be, but we aren’t able to display our LED wall prices on our website for three key reasons:

Get in touch and our sales team will quickly be able to give you a realistic ‘ballpark cost’ or a detailed quote based on your needs.

Get your quote today

Why use an LED wall?

There are numerous benefits of using LED walls

Speak to our sales team

With this solution there are variable elements that depend on your exact requirements. Please get in touch with our sales team by calling 0161 222 0706 or fill in our contact form for a customised quotation, or to get a ballpark starting price for this solution.

Get a quote today

01
Initial fact-finding meeting
We discuss your aims, objectives, your budget, the sites in question, and the solutions and services you have in mind, and any other relevant considerations.
02
We'll do a site visit
We visit your site free of charge to identify any factors which could affect your hardware selection. We also look for any project delivery/risk factor considerations.
03
We review plan validity
We use our site survey findings to re-evaluate our initial recommendations and adjust them accordingly.
04
Our recommendations
We share our recommendations, discuss them with you, then if no changes are needed, we submit our customised quote.
Case Study

Ready to make an impact?